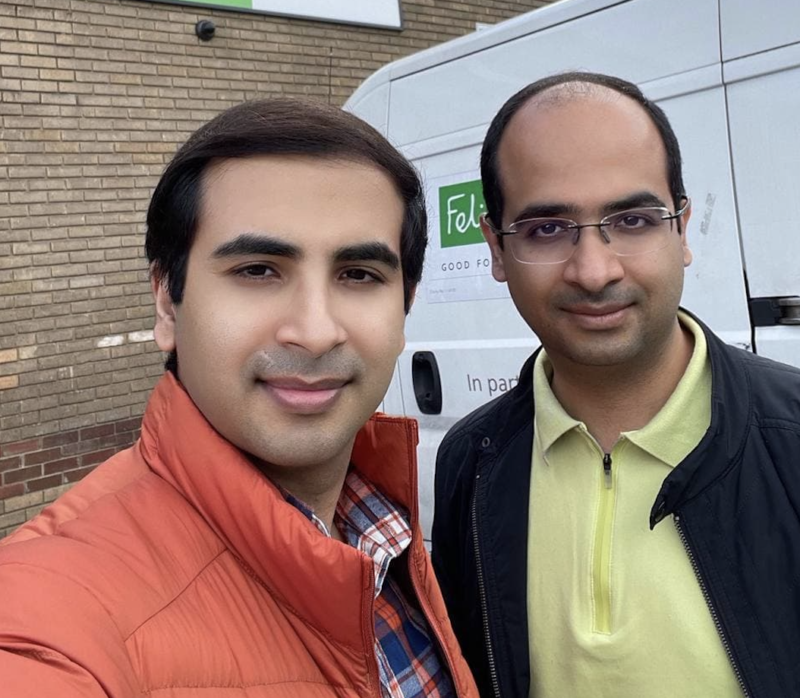 You could say that Bahram & I earned our ‘nut stripes’ from the ground up, having both grown up picking pistachios on family-friend owned farms in Iran.  Needless to say we’re massive fans of all things nuts, having initially built a successful London-based business around procurement, wholesale and export.

Perhaps in the past the UK had been hampered by an undercurrent of nut apathy on account of too many nut-themed products using lower-grade ingredients, cheap ‘padding out’ fillers and a lack of truly galvanizing flavour blends.

It was 2018 when we decided that the moment was ripe to enter a retail arena dominated by tired and uninspiring nut offerings.  Seeing the way that pioneering brands like Pip & Nut had taken a stand for legumes and re-energising a peanut butter category that for so long been deemed downmarket and dowdy, convinced us that we could do the same for discerning nuts, especially the noble pistachio that had historically been overlooked as simply too niche and pricey.

The first opening came courtesy of nut milks that had once upon-a-time been a ‘leading light’ within the alternative milk market before losing its way when oat, soy, rice and coconut milks started to flex their collective muscle.  Almond, a one-time trailblazer of the alternative milk movement was quickly losing its allure on account of being associated with countless poor quality product executions.  The fact that 1 in 5 consumers are moving away from traditional cow milk; a decision governed by escalating concerns around health, ethics and the wider environment, convinced us that pistachio’s time was now; so we launched two variants (a lightly sweetened & an unsweetened) that came complete with added B12 and calcium.  Unlike its liquid nut peers, this was an ‘alternative milk’ overflowing with gastronomic allure; a dense, velvety-textured nut drink that was low in calories yet packed with good nutrition.  Proud listings in Ocado, Amazon and most recently Selfridges suggest that nut milks will once again be leading from the front.

On an altogether more indulgent footing my brother and I have set up Borna Foods to make significant strides within the alternative butters sector with such deliciously diverse products as Pistachio (smooth, crunchy & sweet roast crunchy) Cherry Almond & Blueberry Cashew and Strawberry Pistachio.

The alternative butters category has been a deserved beneficiary of Lockdown as stuck-at-home commuters with a little more time on their hands looked to reacquaint themselves with the breakfast ritual as an ‘early doors’ opportunity to take on good nutrition.  Whilst pandemic upside has been thin on the ground, one undoubted benefit has been a real return to food appreciation (slow food) and less mainstream, artisanal alternatives that don’t dabble in cheap fillers (palm oil) salt and 2nd best ingredients.  Whether we’re talking about simply spreading on bread and bagels, dolloping into a smoothie or stirring within a wholesome porridge, clean-deck nut butters bring so much to the breakfast table and the wider cooking-from-scratch movement.

Whilst it would be nice to claim that as a small, flexible food operation that we were ready with Lockdown struck, especially when you consider that proven nut benefits include providing an abundance of ‘slow-release’ energy, supporting good eye & gut health, lowering cholesterol, blood sugars and championing good blood vessel health.

In truth, we were slow out of the blocks but adapted quickly, assembling an impactful online store and fostering upbeat alliances with proven online heavyweights like Ocado and Amazon.

People often ask Bahram and I if we’d always set out to be ‘foodpreneurs’ and the simple answer is no!  That said, we’ve always enjoyed each other’s company, we’re inquisitive spirits and have complementary skill sets.  We were never the sorts of people who aspired to fly high in a big Blue Chip corporate, so perhaps subliminally our own ‘challenger brand’ venture was always on the cards.

One thing that Bahram and I believe in very strongly is supporting the local community in which we operate.  We’re very proud of our Greenwich ties and whilst we’ve subsequently won bigger awards, it’s our ‘Made in Greenwich’ / best of Royal Greenwich Business Awards that means most and is the first award you’d see if you visited our business premises.  It’s for that very reason that we looked long and hard for a local charity to support before we stumbled across the Felix project which helps tackle child hunger in London.  In our capital alone it’s estimated that there are some 400,000 kids who go without food on any given day, which simply isn’t good enough when you consider that the UK food industry generates over 3 million tonnes of good edible yet surplus food every year and Britain remains the world’s 5th richest economy.

In 2022 Bahram and I decided to leave the breakfast table and take our health-conscious learnings into on-the-go/sharing snacking.  Our two trail mixes consist of a Blueberry, Cashew, Banana & Toasted Coconut option and a Sour Cherry, Almond, Tanzanian Chocolate & Jumbo Flame Raisin variant.

At a time when snacking is seeking to be increasingly permissible, pairing great tastes with nutritional worth and functional benefits becomes ever more urgent.  We felt our business was better placed than most to assemble two moreish jumbles of 100% all-natural good-for-you ingredients.  Despite very distinct flavour profiles each recipe prioritises ‘nutritionally robust’ ingredient decks (rich in iron, calcium and protein) whilst actively rejecting any ‘artificial unnecessaries,’ added sugar OR life-extending ‘sulphured’ fruit.

It’s always been a long-term ambition of ours to utilise our fine nut & dried fruit expertise to introduce a couple of meticulously mingled Trail Mixes that showcase ‘healthier living’ ingredients in a more enticing light.   There’s long been an opening for Trail mixes that only operate with finest single origin cacao, discreetly toasted coconut, and enticingly sour cherries that offer a genuinely ‘tart twang.’ We’re especially proud of our super sweet banana slices that aren’t those bland, crunchy disks of nothingness that so many others insist upon.

Initial responses to our generous-sized ‘foraging’ bags, which contain just the right blend of headline ingredients) has been very positive indeed, especially with so many traditional trail mixes being dry and unadventurous and not in tune with supporting today’s increasingly frenetic lifestyles.

In short, Borna foods is a young, vibrant supporter of nutritionally abundant nuts that have too often been wrongly perceived as a frivolous ‘support cast’ ingredient, as opposed to an authentic ‘hero of the hour.’ Today, thanks to Borna Foods and others, nuts of every shape and flavour persuasion are back in the spotlight!