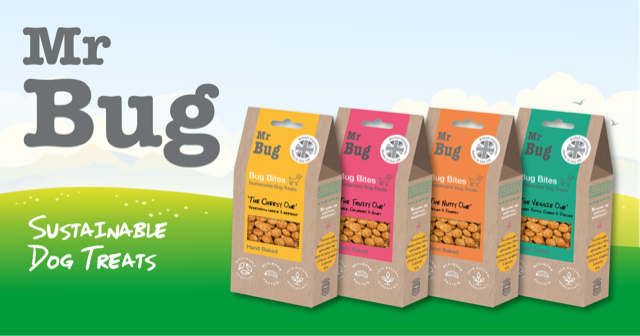 It’s estimated that the demand for insect protein as a key constituent ingredient in pet food and animal feed could well surpass half a million metric tonnes in 2030, a seismic rise from the 10,000 metric tonnes produced in 2021.  Such soaring numbers aren’t that surprising when you appreciate that 2020 German/British research findings concluded that the environmental impact of total pet food equated to the total environmental impact of a land mass twice the size of the UK.  Worse still was the conclusion that greenhouse gas emissions from total pet food production alone would make it in total geographical terms the 60th highest emitting country in the world (mirroring the total emissions of a nation like Mozambique!).

Today the carbon pawprint of pets is an uncomfortable subject that can’t be skirted around any longer, which is why a new generation of petfood pioneers commit to championing insect-themed recipes that marry long-term sustainability with more environmentally-friendly thinking.

Entovegan appreciation among humans has historically struggled in Western Europe and North America on account of a deeply entrenched cultural ‘yuck factor,’ even though 80% of the countries on our planet have happily munched their way through 2000+ species of edible critters for centuries.  Today the rapidly-mushrooming health & wellbeing agenda being extolled by ‘pet parents’ in the UK means that insects are once again on the menu, because when it comes to the diets of our four-legged friends we don’t feel quite so squeamish.

Mr Bug is a fledgling enterprise initiated by seasoned entrepreneur, Conal Cunningham, who having decided that setting up mealworm farm based in deepest Devon was his next must-do venture concluded that creating top tier entovegan pet treats provided the perfect 1st staging post for normalising the consumption of edible insects.   Mealworms for anyone who might not be aware are the Rolls Royce of gourmet grubs, one might say the original superfood.  Whilst insects in dog foods and treats is nothing new up until now the bug of choice has been the black fly larvae, a bitter-tasting stalwart of animal feed that recent research has shown to be high in best-avoided saturated fats. In stark contrast, the podgy mealworm grub provides a rich nutty twang that has long made it a bug of choice when we’re talking human food.  Mealworms are a veritable wriggly feast of nutritional worth packed with impressive quotas of calcium, B12, iron and all 9 essential amino acids.

In a world where today’s dogs are living longer than ever, growing numbers are finding themselves exposed to ever greater numbers of ailments and deficiencies, which means providing the right level of nutritional intake has never been more important.

Conal certainly isn’t an entrepreneur who could ever be accused of letting the grass grow under his feet, from being expelled from school to a heart-pounding shift in the marines (where his deep-rooted appreciation of Devon was forged), Conal eventually moved to London with his guitar, a pocket full of plectrums and a niggling suspicion that he might well be the next big thing in rock!  Success did ensue but not on a life-changing scale, which was about the time Conal turned his attention to setting up a state-of-the-art Shepherd’s Bush studio, which to many people’s surprise (Including Conal’s), became a rip-roaring success of some note.

Yet for all the studio’s noteworthy success, COVID was starting to make its debilitating presence felt and London didn’t seem quite so family-friendly, which was slowly but surely reigniting Conal’s and Jaq’s enthusiasm to relocate to the countryside where they and their children could enjoy fresh air, acres of greenness and an altogether better work/life balance.

A new excursion into stylish pet accessories products (a stylish poo bag holding key fob) that enjoyed a ‘fair degree’ of success further convinced our inquisitive entrepreneurs that the blossoming ‘pet humanisation’ trend was here to stay and that the growing enthusiasm among parents to scrutinise and improve the nutritional worthiness of their daily diets would soon spread to their pets.

According to Conal, ‘The idea of owning an insect farm had been burrowing away for a while as I looked at the sustainable nature of bugs and grubs so I sat down with good friend who’d escaped to the countryside before me and convinced him over a fair few beers and a lot of laughter to join me on my latest curved ball adventure.’

According to Conal there are a lot of reasons why Mr Bug deserves to succeed.  For one thing a credible British bug farm in the SW that can take full advantage of the abundant fruit & veg waste is long overdue as Holland & Belgium are the current hubs of European farming where ‘grub acceptance’ is a little further down the track.

‘Most importantly is the worrying realisation that our planet is in turmoil and we as a race need to start thinking a little more responsibly, supporting more sustainable and ethical farming practices that are not only less ‘land greedy’ and ‘water wasteful’ but less polluting from a methane emitting perspective.  Grubs and bugs as the most sustainable protein source on the planet offering a higher protein content than cattle, pigs and even poultry.   Grubs consume less food and water and are not responsible for shameless deforestation where large tracts of impossible to replace ancient forest are senselessly sacrificed to make way for the harvesting of traditional animal feed (soy).’

Thankfully today’s consumers are more aware that ever regarding the manifold benefits and shortcomings of what they put in their body and it’s this push for better balanced/nutritionally well-rounded diets that’s also driving the food and treat agenda of the family dog.   ‘Whilst dog food has been on the up for some while with the arrival of more ingredient responsible brands (vitamin enriched, BARF, grain-free, organic….) treats remained a lazy backwater where back-of-barn meats, synthetic nasties and masking salt & sugar were allowed to run wild.  As we’ve learnt from changing human snacking priorities, tomorrow’s dog treats need to repositioned as a moment to appreciate full-bodied tastes and textures that max out both in terms of full-bodied flavours and nutritional worth; and not be worthless scraps of worthless junk food.  ‘Simply put we think Mr Bug merges new nutritional learnings (the merits of insect consumption) with a return to old-school values, simple, easy to recyclable paper pouches, small batch production, clear, honest labelling and transparent/clean ingredient decks.’

From a local rural perspective Mr Bug is also starting to make its presence felt by employing and supporting a handful of young people, many of whom have never held down a proper job before now, teaching them essential yet rudimentary skills like time-keeping and personal organisation.

Another great thing about mealworms is their ability to combine with an array of different ingredients to give the discerning hound a really tasty meaningful choice between The Nutty One (peanut butter, coconut & turmeric), The Cheesy One, (vegetarian cheese and beetroot), the Fruity One (honey, cranberries & apple) and The Veggie One (parsnip, sweet potato and carrot).

Simply put, Mr Bug is an intriguing example of sustainable thinking and the rural economy working as one, providing a British from source-to-shelf product, a great alternative to meat and a veterinary approved protein source in an appealing anytime hand-baked treat format