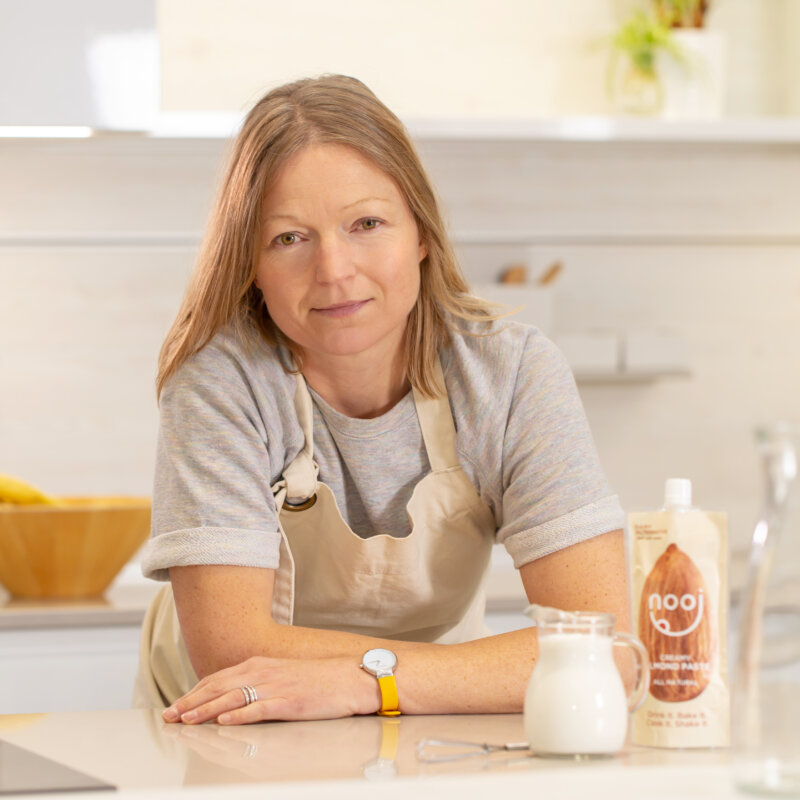 It’s roughly 18 months since the nooj idea first popped inside Caroline’s head and although there have been countless bumps in the road that have temporarily hampered this brand’s eagerly anticipated arrival, the good news is that nothing even remotely comparable has appeared on the plant milk scene since, which only further underlines the untapped potential for this category game-changer moving forward.

Nooj is a simple yet breath-taking concept, the UK’s first-to-market nut concentrate paste (in almond and cashew formats) that provides a long, overdue alternative to the abundance of pale, washed out plant milks that are made with only the smallest smidgeons of nuts and needlessly hoarded water that is trundled up and down the motorways and across oceans, creating an unfeasibly large and unwelcome carbon footprint.

Whilst the wider plant-based milk category is in rude health, it would be fair to suggest that nut milk’s influence is waning with oat and soy-based propositions leading the field.  ‘I honestly believe,’ adds Caroline, ‘that nooj’s arrival will put nut milks back on the front foot, especially a cutting edge offering like ours that allows the recipient to choose his or her own nut strength (some incumbent nut milks offer a paltry 2% worth of nuts). Equally as important is the fact that nooj uses the whole nut (isn’t filtered) which hasn’t been subjected to harsh processes during production therefore retaining a fresh quality suited to both milk and general dairy replacement’

Like many of the best food & drink-based innovations, the idea for nooj came about as a result of an inquisitive founder looking to meet an unfulfilled dietary need.  ‘If I’m honest,’ continues Caroline, ‘the idea came about completely by chance,’ when some exploratory kitchen tinkering led to the creation a product that Caroline mistakenly assumed already existed.

‘Despite growing up on a dairy farm as a child, recent GP advise suggested to give dairy and gluten a miss.  I was forever experimenting in the kitchen but was constantly disappointed by other plant-based dairy alternatives.  It’s certainly worth adding that  nooj isn’t geared exclusively toward the plant-based/dairy-free community, it also appeals to those foodies that would welcome an outside-the-box, user-friendly, ‘real’ food product that makes delicious, healthier living recipes easy.’

In ballpark terms each 150g nooj pouch contains over 65% nuts, makes roughly 1.5L of nut milk although this will depend on individual consumer taste and texture preferences.

Whilst a farm-based childhood is always likely to fuel a deep-seated appreciation of all things food, Caroline’s first love was design, having completed an MA in ceramics and glass at the Royal College of Art and then lectured in 3D Design at the University for the Creative Arts (Surrey), where she taught Foundation level Art & Design and Ceramics on the BA hons course.  CaroIine’s reputation within her chosen field was such that she was also invited to complete a couple of public art commissions.  This was also the time Caroline started her family, which in turn meant a serious career re-think.

‘Throughout this time-frame I remained a passionate foodie and healthy eating advocate, a consistent mindset that only accelerated when I had children. However I always wanted to work for myself and own my own business and in many ways developing a food brand is as creatively satisfying as making art.’

Autumn 2021 was the moment when following some very encouraging trials that nooj was meant to make it’s eagerly anticipated Sainsbury’s debut (300 stores) the latest instalment of their highly acclaimed ‘Future Brands’ initiative where potentially game-changing brands of the future get early exposure to coping within a highly competitive supermarket sector.

‘From Day.1 Sainsbury’s support has been incredible and they have really shown how well they can work with small suppliers.  When my two initial production partners went south at the 11th hour, the Sainsburys team maintained their support for the brand and simply waited for us to find the right manufacturer for our products.  Supermarkets often get a bad rap for not appreciating the unique needs of inquisitive start-ups, but Sainsbury’s have been great and their interest and support helped us secure our current supplier.’

Caroline remains adamant that every day as a ‘foodpreneur’ is a bit like a school day and that the best way to learn is via the odd setback.

‘Bringing a new product into the world is a bit like bringing your own offspring into the world,’ concludes Caroline.  ‘If you believe wholeheartedly in the idea, you’ll find a way to make it happen!’

‘Looking back I certainly would have appreciated a smoother journey but then I wouldn’t have found the amazing production partner I have now, or such a significantly enhanced brand.  Being a diligent first mover doesn’t come with a book of instructions but at least I can finally look back with pride’