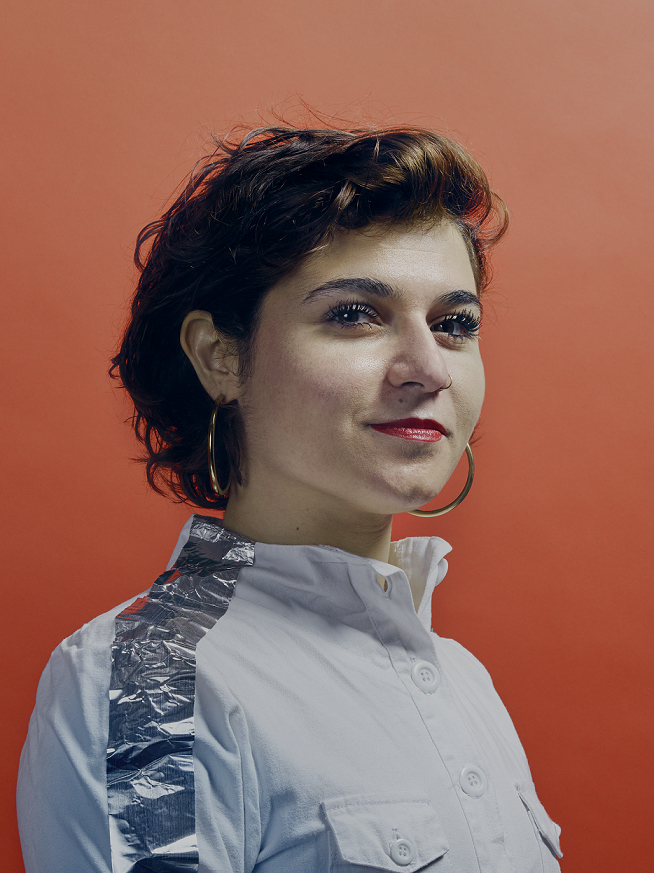 Nelly Ben Hayoun-Stépanian PhD is an award-winning designer of experiences with over a decade of working to manufacture impossible productions and complex events and projects. Nelly can be called an artist, a filmmaker, an experience designer, but the truth is she’s an uncategorisable creative force. Among her diverse, improbable and unfailingly impressive achievements are the creation of the University of the Underground, the foundation of NASA’s International Space Orchestra, and collaborations with the likes of Noam Chomsky, Pussy Riot, Massive Attack and Kid Cudi. In 2022, Nelly launches the Tour De Moon – a lunar-inspired cavalcade of creativity encompassing live events and immersive experiences all across the UK.

I run a design studio called Nelly Ben Hayoun Studios and we specialise in creating unique experiences for members of the public, which could be anything from a rocket launch in a living room or a volcano erupting in the lounge to produce energy to power the kitchen sink. We are trying to find ways to render the sublime accessible as it is often something that is only available to experts or scientists, so we want to use thrilling experiences to present it to the public. Much of our recent work has been focused on developing platforms which challenge power structures to modify the way our systems are being run and we also run a charity called University of the Underground – the world’s first university based in underground spaces and fighting for free postgraduate education around the world. We are also working on our current project the Tour de Moon festival which is free and pluralistic – two values at the core of everything we do. We are invested in the idea that we need to create and support platforms which empower multiple voices to be heard and experienced.

The idea for the company started because I realised that while there is an entertainment industry focusing on creating experiences for members of the public, it is mainly driven by popular or physical ideas such as experiencing being with dinosaurs. This is of course valuable in its own right, but I find it pretty fascinating to explore and design experiences which could challenge our way of thinking – whether that’s about politics, how we understand landscapes, nation states or the economy to name just a few. This is what we have been focusing our energy on for the last six years, to really develop this platform to make sure we can propose ideas about alternative futures to the next generation.

I would say that I never really achieved awareness as most of my life I have been underground. However, that doesn’t mean that I don’t have the network to activate complex production and one thing that has been said about us is that we are the manufacturer of the impossible. This tells us that we have the trust of people who are coming to us with extremely complex productions and so in some sense we achieve awareness by actually just doing the work. We have managed to create free education spaces through our charity, we have made an orchestra happen in space and beyond and we have also challenged power structures in institutions including NASA and the United Nations. We are in the right places and right now we are currently being funded by the UK Government to develop Tour de Moon – our nationwide festival. This will allow us to bring national debates to the forefront of our work, such as bringing back youth centres, nightclubs and restoring nightlife which are all really important to us.

Believe it or not, since getting my doctorate I believe it’s main use has been in teaching me how to write funding applications. This has been really helpful in learning how to respond to objective aims and reading through the properties or requirements of any funding body. I have also been a public speaker for about eight years which allowed me to travel all around the world including places like Thailand, Japan, Australia and South Africa. I discussed how to design the impossible and manage really complex productions but also how to inspire younger generations to start new beginnings and build new platforms, along with the politics of putting together a production of this scale. This put me in front of changemakers such as Malala and Obama and by getting to stages like this it also opened doors to get commissions from huge, global companies such as LEGO and Instagram. I have worked on leading new ventures, innovative projects and collaborated with lots of charities and independent publishers and filmmakers too.

We see our success in the long term development of each of these projects. A lot of the time when people think of these campaigns they think of the actual event itself but for me, a lot of what I’m trying to achieve is the long term impact so that all of the communities I want to support are receiving this. This means working a lot with policy makers in order to build new laws and rules, support nightlife workers and youth, wherever they may be, and actually figuring out ways and means by which they can gain access to culturally relevant projects and finance. I have also been really fascinated by the idea of introducing critical thinking in spaces like NASA or the UN or the militaries which is where I spend a lot of my time trying to change the way that things are being made.

My current plan that I am working towards is a free, nationwide festival called Tour de Moon which will travel across the UK in May and June. The event is dedicated towards new beginnings and collaborating with youths and the Moon, which is seen in this festival as a character and a landscape to prompt radical imagination. We are doing this through eight different programming strands so people will be able to experience out of this world productions, whether it’s in film, music or the digital realm but also specifically immersive experience. We will also have our Moon Convoy which is a parade touring towns all over England so I am really exciting to do that, along with pioneering independent publishing through Moon Press – which will give a voice to underrepresented authors.

Can you share you top tips for entrepreneurial success?

I would say to remember that you are never on your own. Often as an entrepreneur you can find that your problems are lonely and that you don’t want to share issues with friends because there is a level of stress that comes which running a company. However, I would say to remember that there is a network of support out there and I really rely on my girlfriends and non binary friends to teach and support me. Surround yourself with a good group of peers you can rely on and find an outlet, whether that’s sports, arts or going to museums, so you have spaces to break away from work stresses.

Who are the 5 people who inspire you the most and why?

Suzanne Lee – The founder of BioFabricate which is a new research library looking at new, completely sustainable materials for the future. She gave me my first job out of university teaching as a research assistant for her and she has been supporting me with everything I have done since. Not only an amazing entrepreneur but a great friend and fantastic support too.

Natasha Patterson – My boxing coach and also a director of Tour de Moon. She is the head coach at Pedro’s Youth Club – one of the UK’s oldest youth clubs – and works to support not only young people but also everyone in the community, day and night.

Dr Nadine Stepanian – My mother and a GP who has been working in emergency units since I was a child, saving lives and supporting patients. She is an incredible woman.

Tea Uglow – My dear friend who has been pioneering digital direction and is the creative director of Google’s Creative Lab in Sydney. I will always say to her that she is the most enlightened critical mind I know of so every time I have some complex, critical thought that needs unpacking I will go to Tea because she is absolutely amazing.

Katherine Jackman – My producer and a force of nature who is teaching me a great deal through the making of this new festival, along with Victoria Adams – my studio manager and assistant director – and Ayanna Blair-Ford who is also my former assistant director, Viktoria Gere both incredible humans who are working endless hours to make visions happen.

My most inspirational quote would be “never give up, be bold, be ambitious” and also “to begin something new in the world, that is action” – the latter of which is from political theorist Hannah Arendt.